You can start your day with a walk at beautiful Poros (about 40 minutes from our departure). Afterwards we can go for swimming and snorkeling at a small complex of uninhabited islands and spend a few hours of relaxation in the sea! Our final destination will be the elegant island of Hydra with its magnificent restaurants and its unique architecture! On our way back, you will be able to watch a memorable sunset!!!

Hydra island, built in the shape of an amphitheater on a slope overlooking the Argosaronic gulf, is one of the most romantic destinations in Greece. Traditional stone mansions, narrow cobblestoned streets, secluded squares and above all the banning of cars and the use of around 500 donkeys as means of public transportation, explain the reason why Hydra preserved its distinctive atmosphere through the passage of time.

As you walk along the waterfront, the heart of the town, you encounter monuments, churches, canons, museums, old mansions, statues of famous heroes, the old gunpowder store, shops and cafes, while picturesque winding streets lead you to neighborhoods located at the upper part of the town, as well as to the old neighborhood of Kiafas.

Hydra is also a yachting paradise, as every summer groups of sailing boats moor at the harbour, where they are joined by dozens of sensational motorboats and yachts.

The island experienced exceptional economic growth in the past thanks to its great naval and commercial activity. The Hydriots contributed significantly also to the 1821 War of Independence as their powerful fleet participated in crucial sea battles. It is rather impressive the fact that such a tiny island is the birthplace of five Greek Prime Ministers!Lavish stone mansions owned by important families (Voulgaris, Kountouriotis, Tombazis, Kriezis, Bountouris etc), and built by Italian artisans reveal the wealth that experienced the island in the past. Today most of these mansions house the island’s museums. 300 churches and 6 monasteries spread around the island as well as the cannons and the statues of the Independence War heroes still standing at the balconies of the islands create a romantic mosaic.

As you walk along the waterfront, the heart of the town, you encounter monuments, churches, canons, museums, old mansions, statues of famous heroes, the old gunpowder store, shops and cafes, while picturesque winding streets lead you to neighborhoods located at the upper part of the town, as well as to the old neighborhood of Kiafas.

Hydra is also a yachting paradise, as every summer groups of sailing boats moor at the harbour, where they are joined by dozens of sensational motorboats and yachts. Rent a boat at the harbor in order to explore all its beauty. It’s worth mentioning that Hydra became famous all over the world thanks to the film “Boy on a Dolphin”, shot on the island in 1957 with Sophia Loren leading the starring role.

Visit the island’s museums to take in a little history:

• Historical archive-Museum of Hydra: It showcases rare archive material related to the history, tradition and culture of the island from 1708-1865. It includes an Archive Section, the Museum Section, and the Library.

• Ecclesiastical and Byzantine Museum: Housed in the old Monastery of the Assumption of the Virgin Mary, it houses vestments, holy vessels, elaborately decorated gospel and icons, mainly from the 18th century.

• Museum of Post-Byzantine Art and History of Hydra: Housed in the mansion of Georgios Kountouriotis, the museum exhibits personal artifacts of the Kountouriotis family, as well as exhibits from the modern history of the island.

• Mandráki: During the War of Independence it was used as a harbour but today it is an organized beach with excellent water sport facilities.

• Limnióniza: Many people consider it as the most beautiful beach on the island, probably because it takes two hours hiking in order to reach it, and enjoy a swim in its turquoise water!
• Hydronéta: This beach, which lies directly beneath the cannons, has cement decks suitable for sunbathing.

*Agios Nikolaos: A sandy beach, on the west of the island. Access is only possible by boat.

Poros is a beautiful island with relaxing atmosphere. The nice beaches, the picturesque town and the lounge nightlife make it a popular summer weekend destination for the Athenians. With green pine trees and crystal water, the entire island gives a valuable sense of mind and body relaxation.

Things to do in Poros
Peer into the history and tradition of the island through a visit to its Archaeological and its Folklore Museums.

Follow a route through the narrow streets of the town that will lead you up to a hill, where the trademark of the island stands: the historic Clock tower, where you can relax and enjoy a panoramic view of the whole town.

Take the opportunity to stroll around the Lemon Forest, a verdant hill with more than 30,000 lemon and orange trees, located on the opposite situated coast of the Peloponnese, southeast of the town of Galatás. The view from the hilltop to the island of Póros is really stunning.

Boúrtzi, home to the fortress of the Byzantine admiral Nasar; Modi, with its shipwreck from the Mycenaean period, and Daskaleió, with its chapel dedicated to Virgin Mary.

Poros is also famous for its beautiful beaches, stretching uninterrupted along the island’s coastline. Swim in the crystal clear waters of the long and sandy beach of Askéli; the hotels and bars situated here make it an interesting tourism resort with buzzing nightlife. Meyálo Neório is a sandy beach where the pine trees sweep right down to the water's edge. Bask in the turquoise blue waters of the “Love Bay”, a beach surrounded by verdant pine trees that literally dip their needles into the sea. Enjoy a unique natural shade! 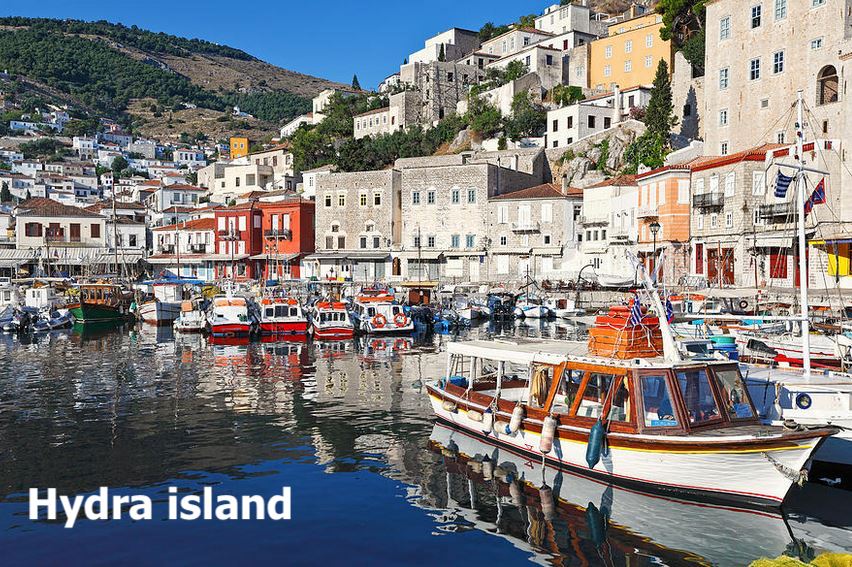